Then there are some errors which indicate that localized texts are received in a wrong format - in quotes when they should not be quoted. Look at the final application screen - all German texts have double quotes around the text, which is likely also the cause for the fourth error dialog about writing a help file (You cannot put text with quotation marks in a filename, so it fails.) The mentioned log file is attached, but likely doesn't help much.

The application itself displays two squares after every German text. Using "Extras" -> "Reset to English" resolves the problem. 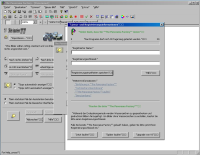 P.S. The application as major other issues, basically it freezes when setting control points and when it actually starts stitching images, but this is covered in CORE-13765.

P.P.S. Of course there were no locale issues with PanoramaFactory 4.5 on a real WinXP.